Composing on the T60

One thing I like about this old laptop is the new keyboard. Well, it’s new, but its design is old. In a way, this keyboard is the laptop equivalent of the Model M keyboard by IBM, it was a classic favorite. It just fit your hand and had an unmistakable feel. You didn’t want to stop typing. That’s about hos this keyboard feels. But it didn’t come with the laptop.

The keyboard that did come with the laptop had food particles stuck under the keys. There was some sort of liquid that had been spilled over the tops of many of the keys. And there was a grungy and sticky feel to the keyboard. So I ordered a new replacement keyboard. And this one is terrific.

The replacement wrist pad is also new. This one doesn’t have a fingerprint reader, which never has seemed to work correctly under Linux anyway. But the new wrist pad feels delightful against my palms. It feels clean and fresh. It cost more than the entire laptop when I bought it from ebay. So did the keyboard. 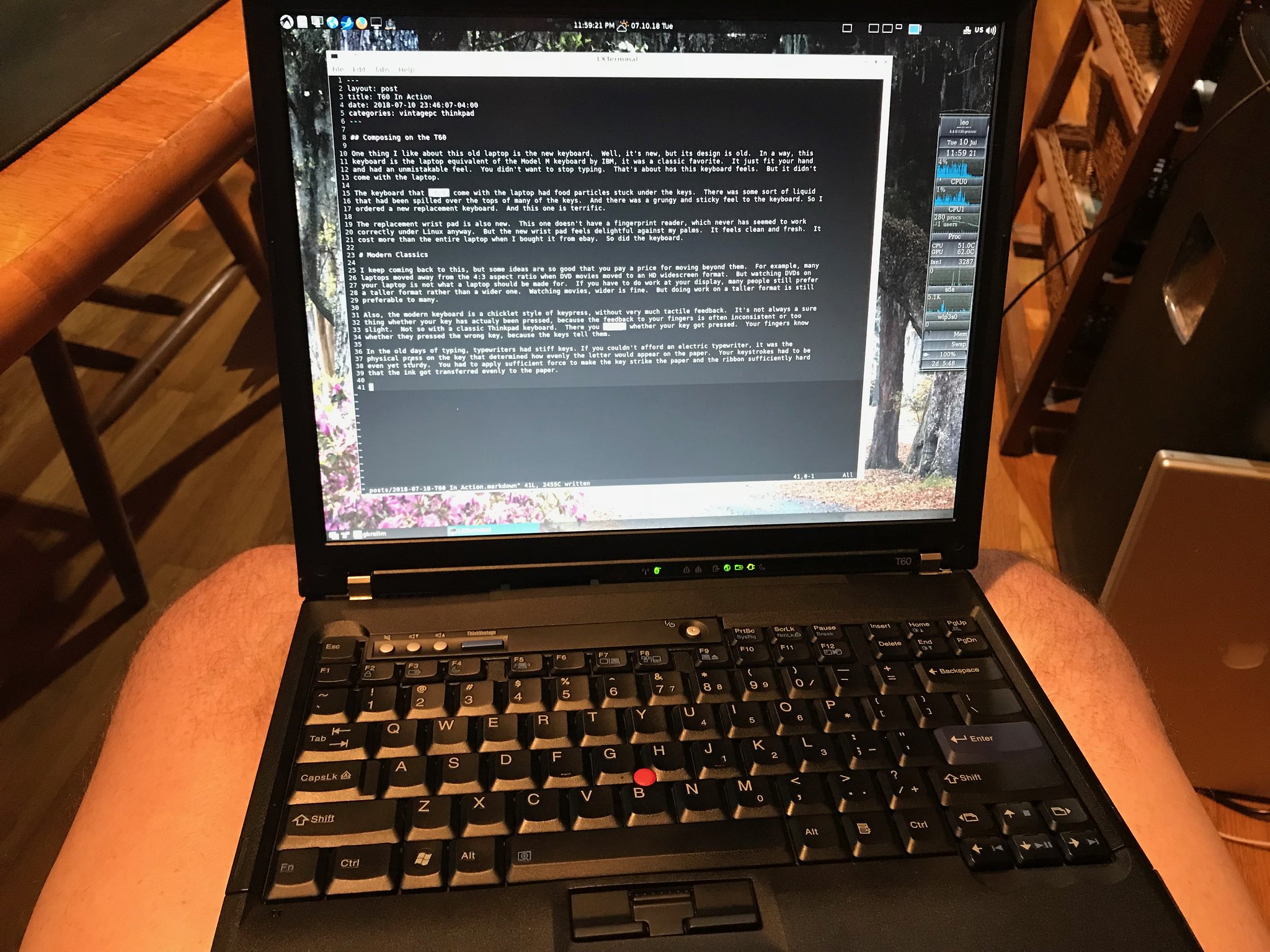 I keep coming back to this, but some ideas are so good that you pay a price for moving beyond them. For example, many laptops moved away from the 4:3 aspect ratio when DVD movies moved to an HD widescreen format. But watching DVDs on your laptop is not what a laptop should be made for. If you have to do work at your display, many people still prefer a taller format rather than a wider one. Watching movies, wider is fine. But doing work on a taller format is still preferable to many.

Also, the modern keyboard is a chicklet style of keypress, without very much tactile feedback. It’s not always a sure thing whether your key has actualy been pressed, because the feedback to your fingers is often inconsistent or too slight. Not so with a classic Thinkpad keyboard. There you know whether your key got pressed. Your fingers know whether they pressed the wrong key, because the keys tell them.

In the old days of typing, typewriters had stiff keys. If you couldn’t afford an electric typewriter, it was the physical press on the key that determined how evenly the letter would appear on the paper. Your keystrokes had to be even yet sturdy. You had to apply sufficient force to make the key strike the paper and the ribbon sufficiently hard that the ink got transferred evenly to the paper.

Also, for something like word processing, you don’t need very much power. In fact, for me, since I’m typing into Vim instead of an actual word processor and letting Ruby translate my markdown to html, I need even less. I don’t even need a true word processor.

It would be inappropriate to try to do intensive gaming on this laptop. The graphics and memory are not strong enough. Light gaming, sure. That would be okay. But don’t try to get this machine to play the latest immersive game with high or ultra settings. However, writing a computer program would be just fine. Writing your novel or short story, no problem. You might even be able to stream a television show or two without over heating. But you’d probably better not plan on making a day of it on this machine. If you want to binge watch Game of Thrones, forget it. You’ll probably get high thermals and get throttled or shutdown.

However, if you wanted to spend a day doing homework for a programming class, that would probably work fine, as long as your project was not too big. But there’s probably room for anything you would be doing by yourself.

In short this computer feels like a true work horse, one that is comfortable and eager to please. And it cost me less than $30 with shipping. It’s old. But it’s not dead. Plenty of strength to do most of what I need to do in this machine.