I think the T60 was perhaps the nicest Thinkpad ever. At least that’s what I think at the moment. It was the last Thinkpad IBM’s moniker was on. Successive Thinkpads, even of the T60, had Lenovo instead of IBM. Also, it was just an exciting time for computers: we were just entering the 64-bit CPU era. And T60s started off with the Intel T2300 and T2400 and ended up with the T7900 I belive, which was one of the first 64-bit CPUs. These were all Core Duo’s, or Core 2 Duos. Oh, this was also the transition from IDE to SATA interfaces for drives. It was one of those new rooms you enter into where everything changes. Exciting times.

Many people say that the T420 was the nices Thinkpad, or perhaps the X220. We all have our preferences, but these old Thinkpads are still worthy of a lot of respect. Most people don’t use more computing power in their work today than what these laptops brought with them. Unless you’re playing Triple A games or rendering 1080p video, you probably aren’t pushing that i5 or i7 CPU you have in your modern PC.

This was still the era of 4:3 screen size ratios. Much like the older television screens, this laptop doesn’t have an ultra-wide display. It’s kind of nice that way. Sure, if you want to watch high-def movies, they won’t fit as well. But that’s not really what this machine was made for anyway. This was a work computer. And plenty of people still prefer to work on a 4:3 ratio display.

This era in computing also represents something I like to call “Just Enough”! 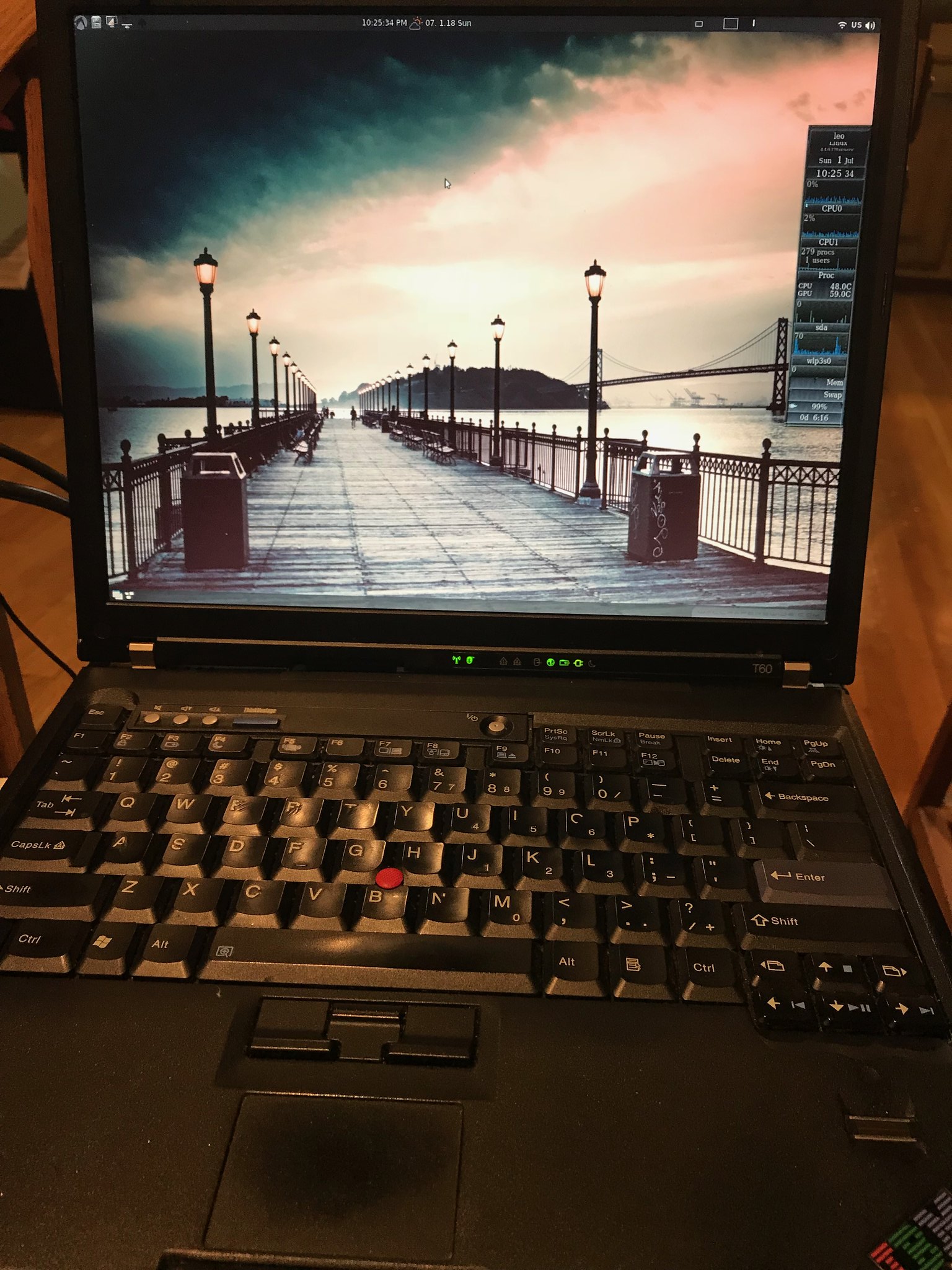 This box here cost $24 off of ebay. It needed some things. A hard drive and caddy and drive cover. A power adapter. But I had an old SSD lying around. There was a broken part on the wrist pad where the plastic was broken off. A replacement part was available for $30. I replaced the keypad itself for another $30. Added some RAM. Okay, so after adding up all of these little things, I probably could have found a better deal. It’s still not bad.

This laptop came with 1GB RAM onboard. That allowed for some more OS choices, and I went with LXLE Linux. That distro is based on the most recent LTS Lubuntu release, which was 16.04 as of this writing. So the laptop is now running kernel 4.4.0. It has a T2400 CPU, one of the early Intel Core Duo’s. I should probably replace the fan too, because the CPU is running around 50°C, and the GPU is running a tad over 60°C. This is a laptop, so those temps are not that worrisome, but I usually expect a little better at idle speeds. So I think this tells me that the fan is probably jammed with dustbunnies. Might be fun to open everything up and clean it out. It’s probably pretty scary in there.

The difference between this CPU and the latest that will fit in the Socket M is about double the speed for a math-centric computation. Or so I read from people who have done some tests. So there might be a case for upgrading the CPU here. But the entire design for the T60 changed a lot during its lifetime. As I mentioned, there were lots of big changes during this time period. So it might just make more sense to just use another of my many laptops if I really need the horse power. It’s not like I only have this one sample. This is sort of buying a vintage car. I don’t really intend to drive it in competition!

The T40 is also an example of a classic. Neither one is a beast by today’s standards, but they both still work rather well for most daily tasks.

I never got a chance to run LXLE before. Most of the desktop machines I’ve built have been rather powerful and have not needed a lightweight desktop environment or distro. But I’m glad I finally got the chance. It’s a perfect fit on the T60.

As you can see here, it’s a refined desktop. There’s room for lots of customization. The onboard wallpaper choices are amazing. Many more options that what I normally see in distros. Someone with some design chops got their hands on this distro. It’s very tastefully done. Kudos for this!

Most days, if I want to work at Starbucks, I’ll grab my W530 or T430. They both have more modern components and powerful processors. I can run several servers with no problems, especially on the W530 with 24G RAM. But driving the T60 is sort of like a vintage English sports car. It’s not about going fast. Hence, I wouldn’t reach for the i3wm. Something more relaxed like Cinnamon or Mate is fine. LXLE falls into that comfortable category. It’s very nice looking, and it has the added benefit of being very lightweight.

There are lots of substitutions of my normal apps, like Firefox is not installed by default, for example, and there are lots of other apps that I have never used before. But I’m curious, and I’ll enjoy trying them out. Like SeaMonky. Never used it before. But there’s no pressure to be mightily productive on this machine. It can just look pretty and do my daily easy chores. I’m sure it can even handle development tasks once I get it configured to my liking, as long as I don’t have too tight a deadline to meet.

All in all, I’m happy with this little machine. I’ll like it better once I get it all taken apart and cleaned up with a new fan, but even if I don’t get all that, it’s still like driving an old XKE that runs well. That in itself is a bit of a miracle! But also it’s just plain enjoyable.