Linux on the Thinkpad T470 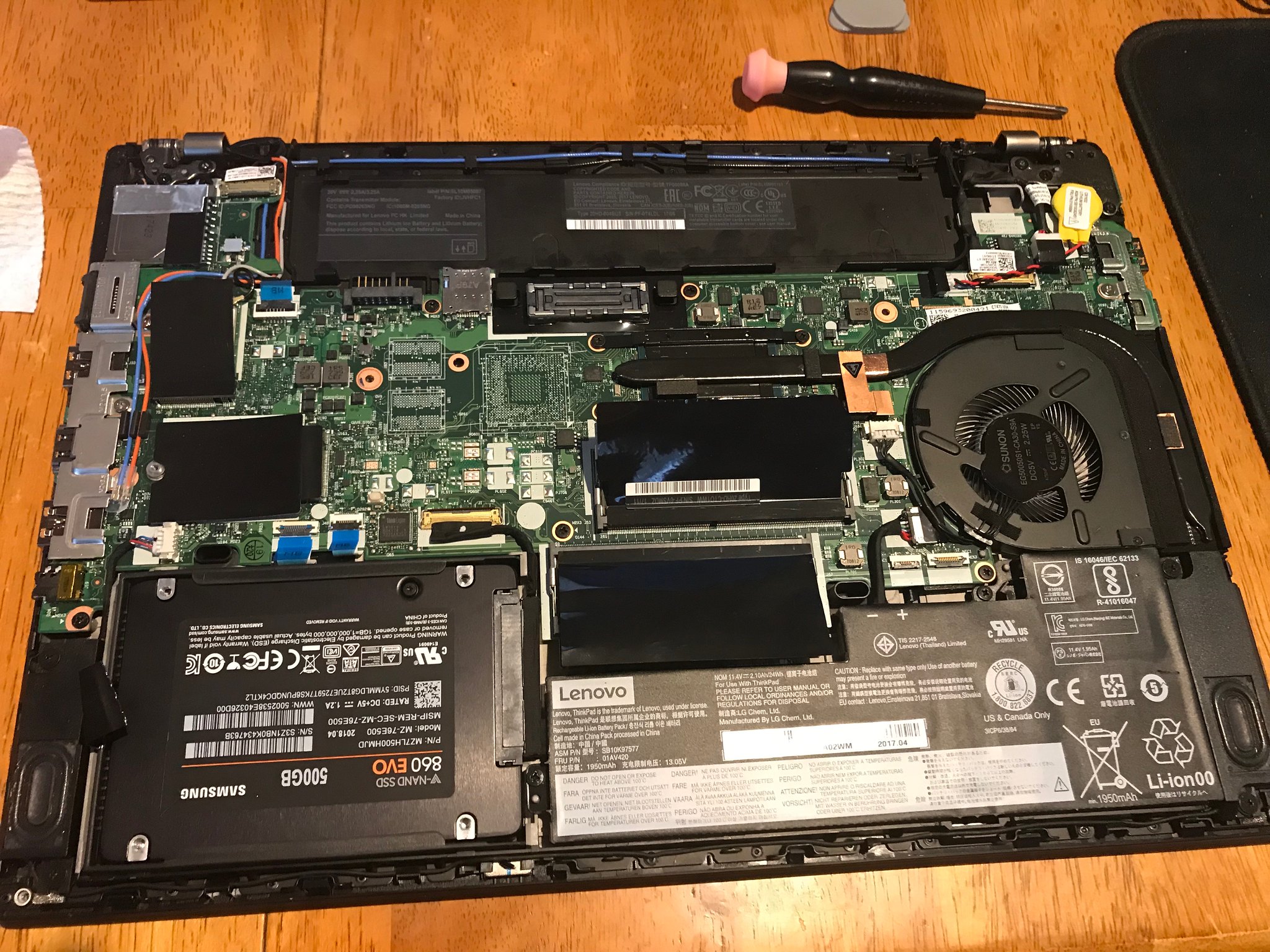 Well, I finally got something that I’ve been wanting a long time: a Thinkpad T470. So far the entire experience has not been without drama. There has been a little. But I think things are starting to turn around in this story.

First, The T470 is a little dearer on eBay that I expected, so I had to pay more money than I thought I would. Prices will probably drop after the Holidays. Everyone will be in “paying off credit card” mode. I expect demand will start to fall off. But I wanted to treat myself for Christmas.

Second, configurations have changed a bit, and this laptop surprised me. For example, some versions of this model have an M.2 nvme ssd. Other’s simply have a SATA 3 ssd. This one turned out to be the latter. This laptop came with 8G of DDR4 2400, and I ordered 16G of DDR4 2666, but it seems to be running well under 2400. Not sure what the issue there is. Also, the BIOS/UEFI comes in a dual mode where apparently it first tries to run in Legacy Mode, and then it runs in UEFI mode if that doesn’t work out. (It’s configurable in the BIOS which mode gets attempted first.) Kinda different I think. I just haven’t seen that before. This may have been related to some of my installation drama.

Third, some distros work better with some laptops. I’ve installed a lot of Linux distros. Most of the time, there was no problem. But occasionally I do hit a speedbump. This was one of those times. I first installed Solus Mate. A fine distro. I had already upgraded the laptop with 16G of Ballistix RAM and a 500G 860EVO from Samsung. At first Solus installed effortlessly as I would have predicted, and then the filesystem kept going into read-only mode. Basically, if the entire file system remounts itself in read-only mode, you are hosed. I did the requisite googling and tried the top 10 fixes, but basically I chalked this experience up to Solus not playing nicely with this hardware. When I installed Linux Mint, I didn’t have to change any BIOS settings, and the distro installed with no hiccups and no more warnings of the file system remounting itself read-only.

I’ve also tried several other distros, and they each had different problems. A couple of Manjaro DVDs would not even boot to the desktop installer portion and give me a live distro experience. Antergos Cinchi would start installing but not complete. Elementary would start installing just fine, but then I decided I didn’t really want Elementary, but it made me think about the Ubuntu family of distros.

I already have a bunch of Linux Mint installations. I didn’t really need another one. I wanted some variety. But I installed Mint, and it was on the machine with no drama faster than I knew I had started the installation. It’s like the laptop and the distro were meant to be. I don’t really know what else to say, except who am I to argue with two lovebirds who were just meant for each other?

More Notes about the T470

The reason the T470 stood out in my mind was that it’s the first Thinkpad to go faster than the T430 back on the Intel i7 3rd Gen processor. The T470 is based clocked at 2.8GHz. It can keep up with the T430 and even go a bit faster. Cool! Also, I had read of someone using the T25 Thinkpad’s keyboard on a T470. That would be the Holy Grail as far as I’m concerned. That’s the same keyboard layout as we found on the T410 and the T420, two of the best Thinkpads ever. Now, this Island Keyboard gets a lot of praise, and it’s much better than most laptop keyboards, but that original 7-row Thinkpad keyboard was the best in the history of laptops. To have that keyboard and an i7 Coffee Lake processor – well, that would be amazing. I’m not so sure that keyboard will work out though. It’s apparently not a drop in replacement. I think there needs to be a BIOS hack or three. But more on that at some other time.

This laptop has made some other changes as well. The first thing was that it’s very easy to crack open. You simply invert the laptop and take off the bottom cover, which is held in place by 6 screws and some plastic friction clips. There’s one fewer screw on the front side bottom. Lenovo have replaced a screw with two clips in that location. (Lenovo, if you’re reading this, please put back that screw!) And, it turns out, those clips are not resilient. One broke probably before I even got the laptop. (I bought it used.) These little clips were simply of poor design in my humble opinion. They were not designed to survive more than a few openings and closings, near as I can tell. There probably should have been a screw here instead. Now, there’s a small area where the seam between the bottom cover and the body of the laptop doesn’t fit snugly. It’s not a huge deal. Doesn’t affect performance or heating, I don’t think. But I know it’s there. It bugs me. But not overly much, because I know all the other good stuff this laptop has to offer. (But Lenovo, just put back that screw, please.)

Some things that are just terrific: The Display! It’s a true 1080p. My old eyes can actually see it! Yay! I’ve heard some people say that the display is too dark. I don’t find that to be the case. In fact, I most often use dark themed desktops. So, perhaps it’s just my personal preference, but I don’t think this display is too dark. Perhaps some units just come with darker displays? Not sure. This one’s fine.

There’s room for a 2nd SSD. It’s one of those very small M.2 SSDs. I wasn’t sure this laptop came with such an extra slot. I’m not sure I’ll put one in there, but it’s nice to know I could. I actually think I have one around somewhere.

This laptop is lightweight! It’s an ultrabook, as they say. And Lenovo has really made this an easy-to-carry package. My larger hands seem perfectly at ease on this keyboard. It’s not a ten-key keyboard. But it feels like a larger than ten-key-less keyboard. That’s a nice feeling. Also, I’m typing early in the morning in my kitchen with only a nite light on near the stove. The illuminated keyboard light makes this easy to do. Very nice keyboard light.

This is my most modern Thinkpad, and I wonder how BIOS/UEFI evolution has affected Linux on Laptops. There are probably lots of articles about that topic that I haven’t read yet, but I think I’ll start. I’m troubled that some of my other favorite distros seemed to have such problems with this hardware. It could be user error. But I actually suspect it’s the BIOS/UEFI after reading so many Stack Overflow and other articles about the errors I was getting and the troubles I was having with Manjaro/Antergos/Arch distros I was trying compared to the ease of the LM install.

This is a luxurious laptop. It has far more power than I actually need to do my work. If I were doing video editing or something that intensive, perhaps it would be a closer call. But I’m a web developer and programmer. And unless I’m cracking crypto keys, I’m probably not pushing this hardware very hard. If I were compiling source trees of, say, Linux kernels or something, perhaps that would be a different story. But as far as laptops go, this is a beauty. I imagine there are some gaming laptops out there that would humble this spec. But still, this is a very respectable hardware spec, and I think it will suit my personal needs just fine!