I recently found my wife’s old work laptop, a vintage IBM Thinkpad T40. This would have been from about 2004 or so. It was the bee’s knees at the time. It was a very popular business notebook computer. This particular example came with a 1.5Ghz Pentium M mobile CPU with a Radeon Mobile 7500 video adapter (soldered to the logic board) with about 16-32MB of video RAM. The hard disk was a 30G spinning HD with an IDE connector. There was a built-in 56k modem, an 802.11a/b wifi adapter (WEP was all we had then), 100BT RJ45 connector, a couple of PCMCIA slots, a PS/2 connector, an RJ11 connector for the dialout. I think there were two USB connectors. (I believe this was even before USB2.) The XGA display was capable of 1024X768 pixels. The OS was a 32-bit version of Windows XP. By today’s standards, this was humble hardware, but it was a slick machine in its day.

Unfortunately, this old thing would not post. I kept getting “Fan Error” on start up, and then the machine would shut down. Apparently, the fan did not work, and to keep the CPU from melting itself through the bottom of the notebook, the BIOS would shutoff the computer and power down.

I thought that spelled the end for this old work horse. It had seen its day. It had fought the good fight, and now it was time for the laptop graveyard. Or was it?

Out of curiosity, I did some googling. Was it possible to replace the fan? These old IBMs were quite popular; was it possible there are still suppliers for parts like the heat-sink and fan assembly? Turns out there was and still are sources for all kinds of parts for these things. The parts are often gently used or recycled. Perhaps they’re old inventory? Who knows. But I found a fan for about $9 or so and ordered it. It arrived the same week.

I googled for how to replace the fan, and it turned out to be rather simple. These old notebooks were rather easy to work on. They come right apart and are not nearly as complicated as I thought they might be. After watching one or two YouTube videos, I was an expert.

As you can see, the new fan assembly went right in without a problem. 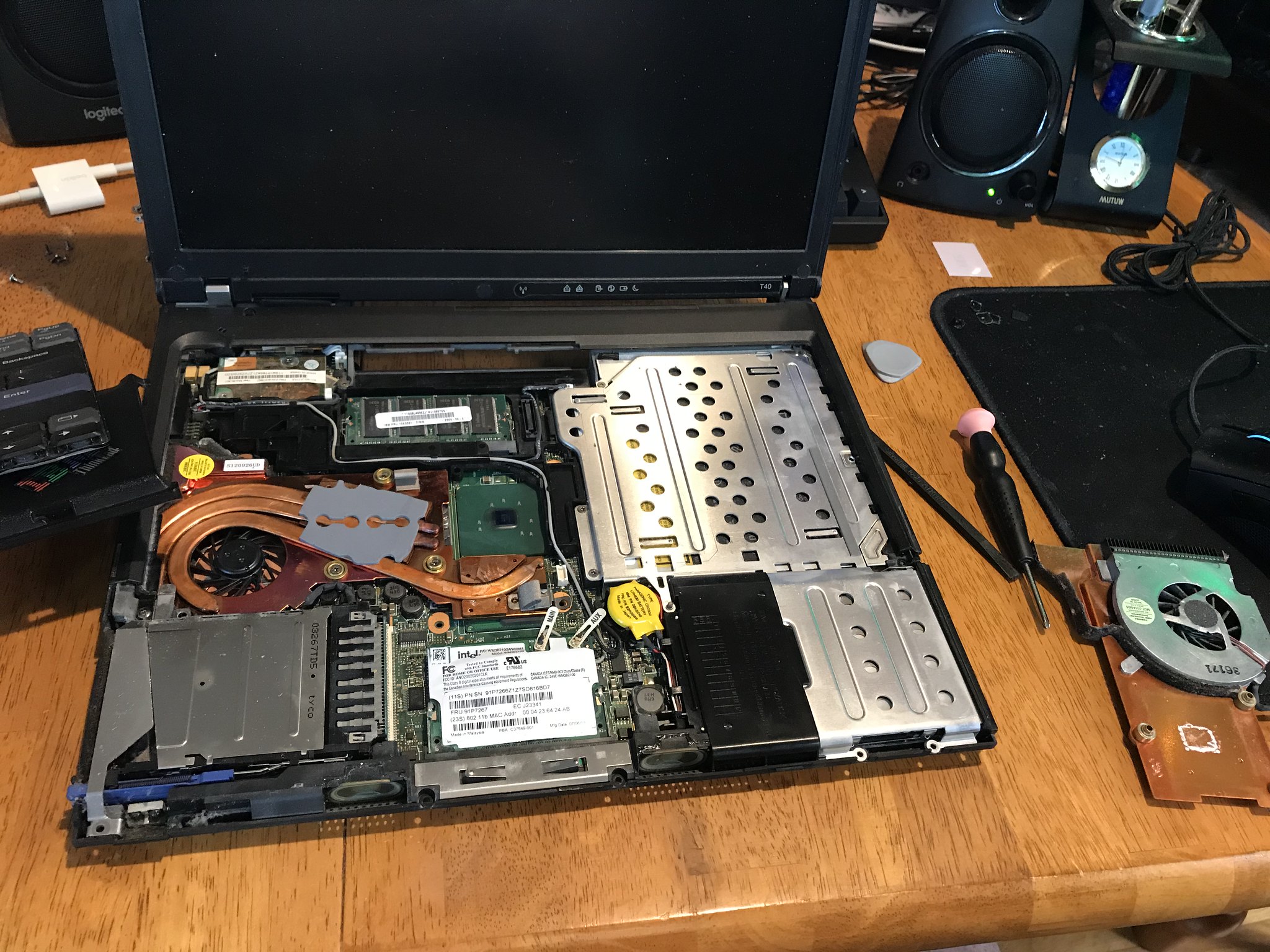 That shiny copper-colored thing is the new fan/heatsink. I needed to remove the old thermal paste from the CPU and apply a dab of new paste, which I happen to have had lying around. I put in the new fan, and the next thing ya know, I’m looking at a Windows XP boot up screen.

Looking at my old desktop was like traveling back in time!

Now, this computer is very slow. I mainly wanted to see whether it could boot and run anything at all. It passed that test! 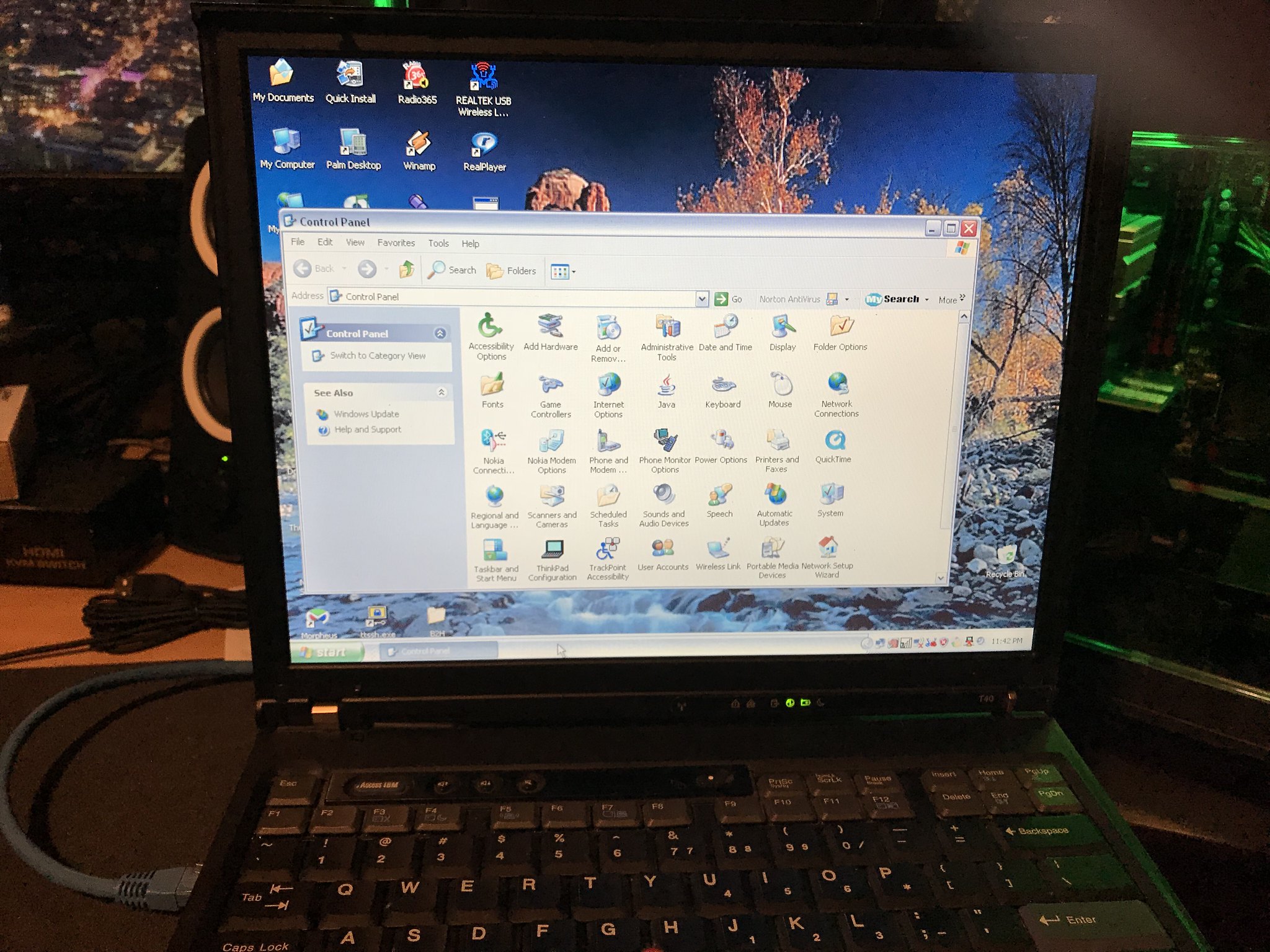 You cannot see just how slow this computer is from the pictures, but at least it boots. I just installed Service Pack 3 for 32-bit XP. It’s still slow!

Just out of curiosity, I wanted to see how much I could upgrade this old thing. I’m curious if there’s anything it could still do today. So for under $60 I ordered the above parts. These will help. Some of the parts have already arrived (the wifi card and the hard disk), but I’m still waiting on the RAM.

Is this machine worth $60? Probably not. Will it actually be able to do anything? Well, I’m hoping it can run a copy of Linux, perhaps. If so, that’s a game changer. The HD that arrived today is 120GB, and the wifi card will do up to 802.11g. So it should be able to talk to my router using WPA2/AES I hope. I can plug in an 802.11ac USB wifi adapter. That actually works. But, since USB was actually slower than this wifi protocol, 802.11ac is actually overkill.

The RAM, at 2GB, should be enough to run some kind of 32-bit linux distro. I’m pretty sure Slackware will work if nothing else. The RAM is really the go/no go piece of it. I can use a very simple window manager that won’t tax the video memory, I hope. FVWM is still out there, and it ran on graphics chipsets even more modest than this one. I’m sure I can find something that will work in that tiny video RAM space.

You know, we’re pretty spoiled today by all of our powerful hardware. But if you think about it, this is the first time in history that we have personal computing devices whose power dwarfs our needs in using them. They’re so powerful that we have no idea what to do with all that power, and we take it for granted. Or we spend it doing things like playing games or making home movies. Before in history, people solved their problems with pen and paper. Computers were reserved for the elite and only the erudite who could write programs actually used their computers. Really, we’re just now starting to create uses for our personal computers. But we’re still in our infancy with them and are only starting to use them up to their potential.

In fact, I would say computer programming is the New Literacy. If you don’t know how to program, it’s similar to not being able to read in the 18th or 19th century. We take it for granted now that people can read, write and do simple math in at least one language. I believe it will soon be expected of a productive citizen to be able to write some simple programs in at least one computer language. A person might easily learn to use the Linux command line and write scripts on this old laptop. None of that requires a graphical interface! In fact, this old beast might be just the ticket.

This laptop is substantially more powerful than the computational power used in calculating the moon missions. Our cell phones probably have thousands of times more computational power than were applied to those trajectory and thrust calculations (I don’t even know what all the calculations were). So forgive me if I’m not so quick to throw this old T40 on top of the recycling pile. I wrote my first BASIC programs on a C-64, my first Pascal programs on an Apple II, and this beats the pants off those old things. If this can run a BSD or Linux shell, I can be in hog heaven.

I’ll let you know what happens in the future when I get some more RAM in there. This old war horse isn’t done for yet. I think there could be quite a bit of life for this thing in the right hands.

My new RAM sticks have not arrived for this machine yet. When they do and I upgrade my RAM, I should be operating with 2GB of RAM. But until then, it’s working fine!

AntiX is based on Debian Stretch. It’s very stable. And I just ran sudo apt update -y && sudo apt upgrade and the command just completed. You can see this below: 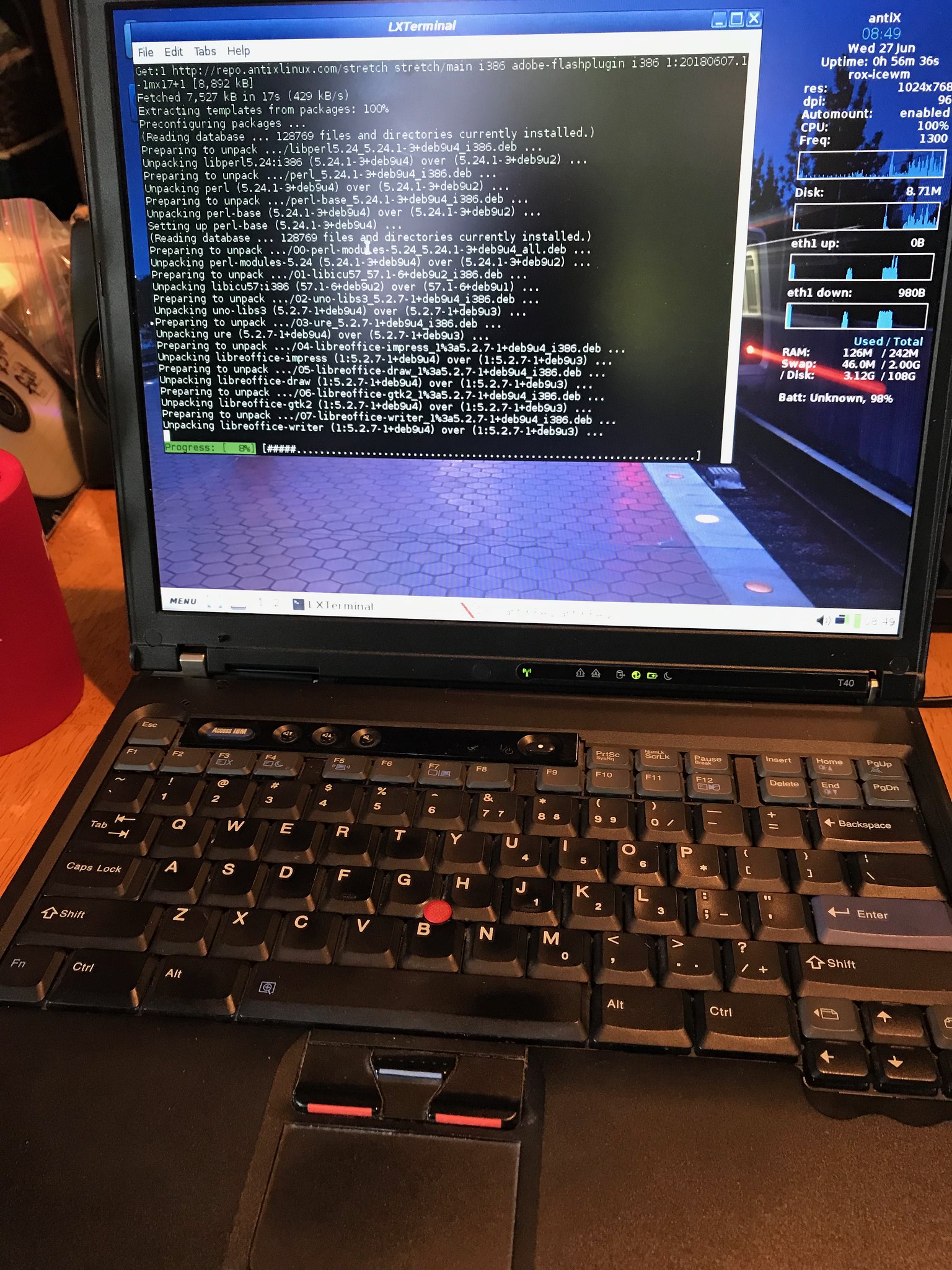 Now, this machine didn’t win any speed contests completing this command. In fact, I’m pretty sure the download part timed out at least once because the speed was so slow. But, it finally completed. It’s a miracle that this thing is not on some junk heap anyway. Any machine this old that is still running deserves a round of applause.

So thanks to the folks at AntiX!

Replacing the Wifi and HDD

It turns out that IBM white-listed various wifi cards to run on the system, and unless you install only one of those white-listed cards, you will not be able to boot properly. The boot process will halt and give you a ERROR 1802 and complain that you must unplug the new wifi card from the miniPCI slot. And that’s what I would up choosing to do.

I reinstalled the original card into the slot, and the system booted normally. Hurray.

But this does seem like a cheapo tactic for IBM/Lenovo to have done. I think they’re still doing this balogna too, if you can believe it. But, at least under AntiX, the old wifi card actually works, albeit slowly.

This still has not happened yet. My new SODIMMS have not yet arrived. I’ll let you know when I upgrade the system.