The Proof is in the Pudding

I say this because there are lots of distros that claim to be lightweight distros. They claim to have non-PAE and 32-bit distros, but they still require more RAM than I had in order to install the distro. But AntiX got straight to work on the live distro, and the system was booted up and operational from the DVD in a very reasonable time.

I recently wrote a post about resurrecting an old IBM T-40. That’s the machine I installed AntiX on (pronounced antics as in The Three Stooges and their antics).

True to their word, the installer completed without complaint with only 256MB of RAM. This distro did not complain one little bit. I cannot tell you how refreshing that was. Even under XP, I was getting nagged right and left about needing newer versions of things, and those things, I knew, required many more resources than this little laptop had to offer. No such complaints from AntiX.

And, there were pleasant surprises along the way:

I will have to say there is one negative, and it doesn’t have anything to do with AntiX. The wifi card is on a whitelist, so it cannot really be upgraded. It can be replaced by another card on the whitelist, but those are all the same speed. The only way to use a card that is not on the whitelist is to modify the bios or modify the bios of the wifi card to identify itself as something other than what it is. So, unless I want to reflash my bios, I’m stuck with this card, for practical intents and purposes.

I learned all this the hard way. I ordered an 802.11b/g card from Amazon. It arrived promptly. It would have worked well with my router. But I got the dreaded ERROR 802: Wifi card is not approved for use on this product or words to that effect. I was told to disconnect the wifi card and try again. There are work arounds, but they all require me to modify my bios, apparently.

This error was very stubborn. The machine simply would not boot normally. I tried to disable the wifi card in the BIOS settings, but I could not. Nor could I change the identification number or any such thing. All I could do was replace the original wifi card.

Which started working great under AntiX, by the way. It wouldn’t work at all under XP. Runs like a, err, slow top under AntiX. Even AntiX cannot make an 802.11b adapter connect at faster speeds than it was designed for. But the wifi card still works better than I’ve ever seen it run on this laptop. 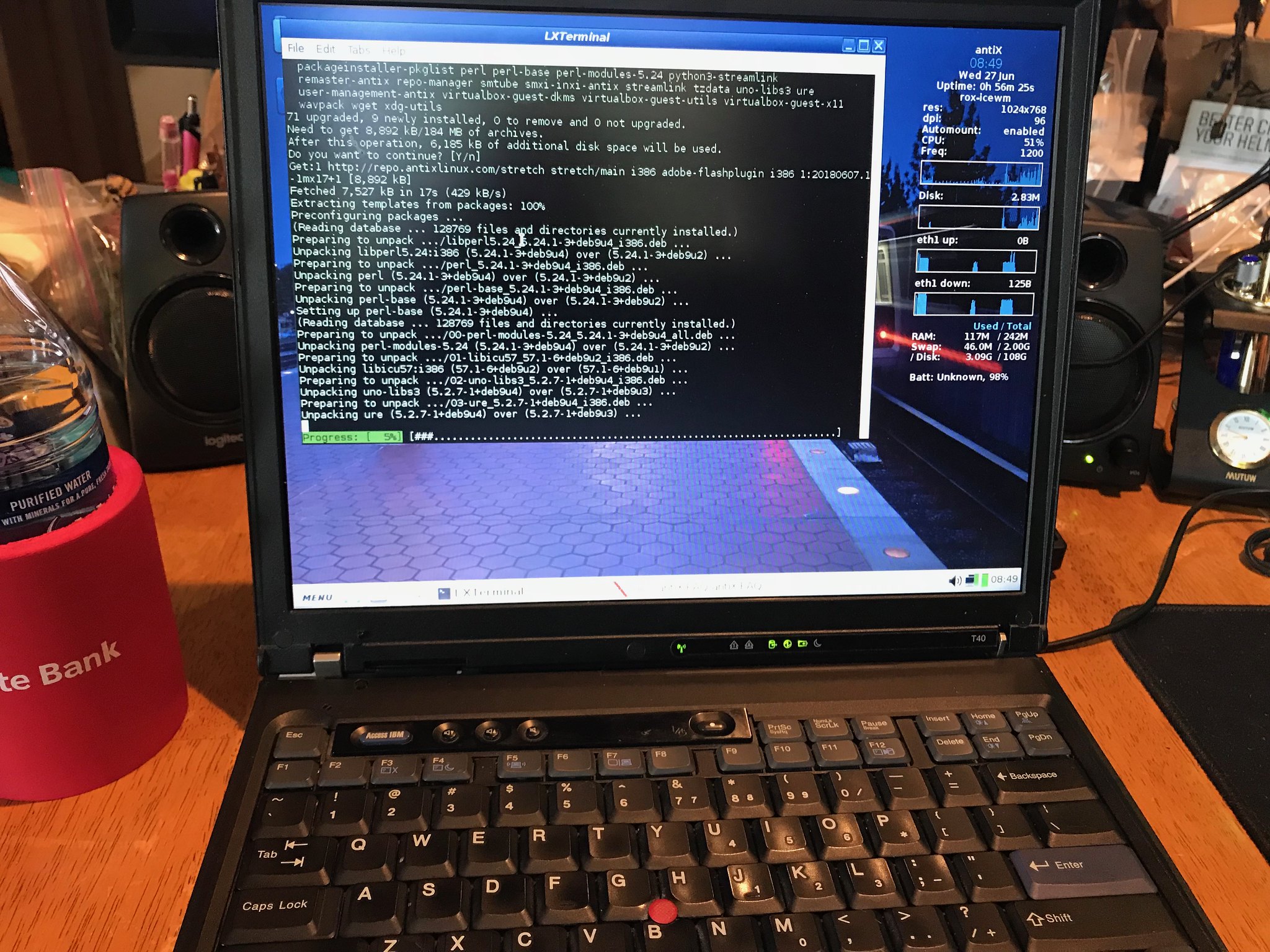 As you can see, the wifi card is working fine while performing a routine update. The speeds are humble, but as long as the connection is tolerant of such a slow connection, my machine gets updated very reliably.

Normally I’m a GKrellM guy and not so much a Conky guy. However, Conky is starting to grow on me. Since I’ve transitioned to i3wm on many of my other machines, GKrellM has a problem being seen unless the outter window gaps are quite large or unless the GKrellM width is very small. Conky does very well in tiling window managers.

All in all, I am very impressed by AntiX. As I mentioned I tried several other distros on this laptop, and the live editions would start to run and fail or something bad would happen. Of all the distros I tried, AntiX was the only one that just ran immediately with no drama.

Apparently, this little distro is exactly what it says it is. And for me, it’s a fountain of youth for my older hardware!