So I guess I have a thing for old Thinkpad T400’s. For about $20 per copy, who can blame me? That’s almost giving then away! But the real story here is Solus Mate. It’s a very lightweight desktop that works great on older laptops. You cannot always say that with modern desktops, but Mate is an exception. By the way, Mate is pronounced Mah’ tay. At least that’s what I understand, but I doubt the pronunciation police are very interested in infractions on the point. 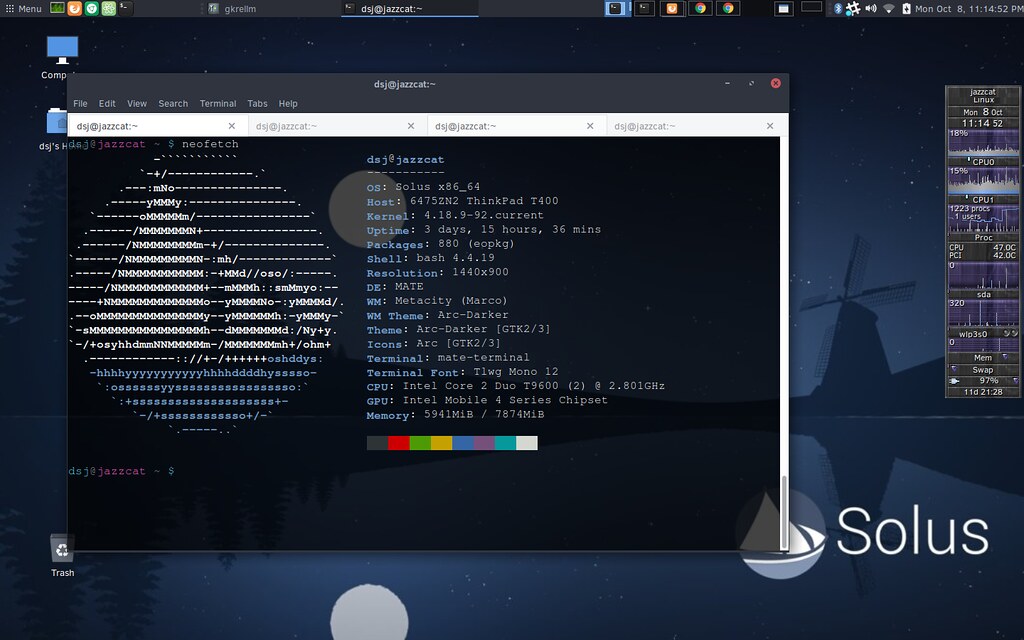 As you can see, it’s a clean-looking desktop. On a laptop you don’t always have a lot of screen real estate, so you need to take advantage of what little there is. Mate doesn’t waste any. You’ll probably want to exploit the virtual desktops quite a bit, and Mate has a nice desktop switcher.

Mate can take advantage of all the old gnome2 themes as well as many of the new gnome3 themes. I’m fond of the Arc dark themes and the icon themes to go with it. The terminal fonts work well too. They’re clear and sharp despite the low-ish resolution of the display. And they’re clear as a bell to my old eyes. No fatigue setting in anytime soon for my peepers.

As you can tell, it’s no problem running a recent kernel on Solus. I’m running 4.18.9 with no problems at all.

We know that Mate is a breeze. What about Solus?

It’s a newer distro. It’s not going to be as established as Ubuntu or Fedora or the like. However, don’t tell the folks at Solus that. The chances are good you might be surprised just how polished this distribution is.

The package manager is called eopkg, and it’s full-featured as well as reliable. The only problem I’ve run into is that Solus might lack a small handfull of apps that I could easily find on other distros. But that’s simply a matter of time before other users with tastes like mine ask for their apps to be added. For example, I’m a fan of GKrellM, that little performance meter you see on the right side of my desktop. It’s a very simple old app, originally written for gtk2. You have to install some gtk2 development files in order to compile the app. The dependencies are simple, and I don’t recall having to edit any Makefiles. Once I got the dependencies, GKrellM built in a jiffy. It just took a minute longer than installing the binary with eopkg.

I’m also running Spotify and Slack, which I found in the 3rd Party section of the app installer. Same with Atom editor and Sublime Text. (I’m a vim guy, but I’m fond of Atom and Sublime!!)

My understanding is that Solus is very responsive to their users. If I sent the developers an email requesting the addition of GKrellM to the repos, I’ll bet it gets added within hours or perhaps a few days at most. You probably could not expect that kind of service on larger distributions

I’m brand new to Solus, but if I were to guess about the distribution’s philosophy based upon experience, it would be they aim for expert-level professionalism. The distribution exudes excellence everyplace I tend to look. Things just work. I haven’t been running this distro that long, but I haven’t found a single wart. Nothing has given me any grief with this distro. I find myself looking for any excuse to use this machine with the Solus distro on it.

The distro looks nice. It makes me feel nice as I use it. And I find myself smiling each time I notice something else I like. I’m reminded of a Robert Frost poem and of my bastardization of it as I use this Solus Mate distro:

Smiles and smiles to go before I sleep…