Peppermint 9 on Another T400

I’m not sure what possessed me to find yet another T400 off of Ebay. But I did get one for about $15 or so. Shipping was about the same amount. But I guess this model is just a terrific laptop. And I need a regular stream of projects like this. Once again, I installed Peppermint 9 on it. This machine has a slightly better spec than the previous machine. It has a faster CPU: an Intel T9600. I’m curious about the P-series of Core 2 Duo’s versus the T-series. I’m not sure if I can notice a difference in performance between the two. But it’s a treat to throw some RAM in it (8G) and an SSD (SanDisk 250G) and see how it does day-to-day. It does great by the way.

I’ve called this latest machine Dolly, which is what I would have called the next female cat I get. It turned out he was already named Milo, and that was perfect already, just like he was. I couldn’t change a thing about him, because he’s absolutely adorable as he is. Anyway, if we ever get another female, her name will most likely be Dolly.

Here’s a picture of the hardware info for this machine: 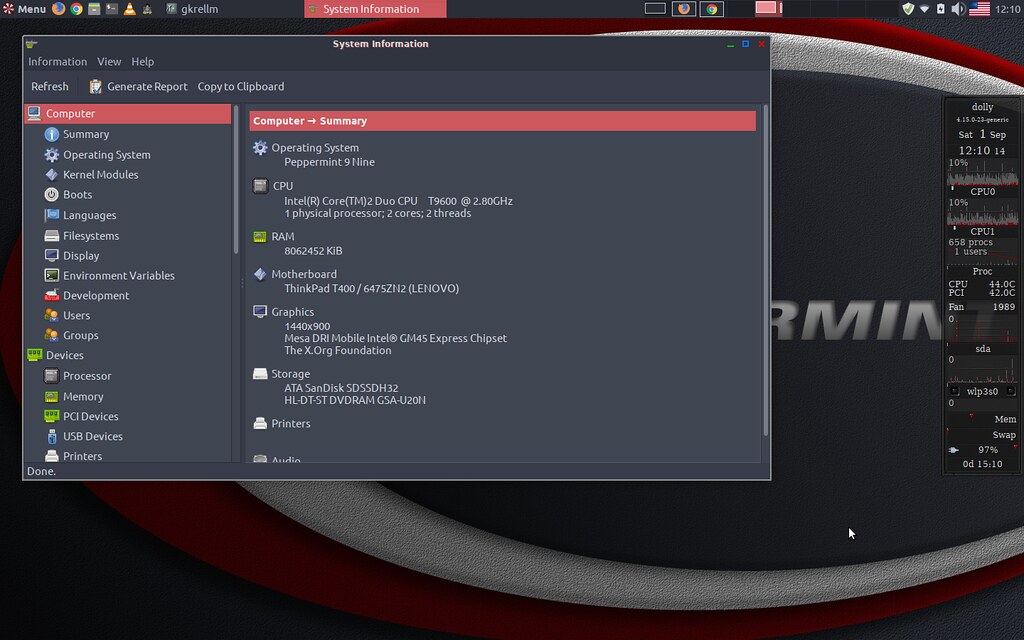 This machine was missing a few things, like a HDD caddy and cover. No HD either. No problem, because I would have replaced that anyway. The installed RAM was 4G, but I max that out usually. And I still consider this machine a lightweight platform, so it needs a lightweight distro. So far, Peppermint seems to be the nicest lightweight distro I’ve tried out. Some people recommend Lubuntu, but they are moving away from LXDE and towards LXQT, which is not as friendly to legacy hardware. So I’m moving away from them. I’m pretty sure LXLE Linux will have to fork the LXDE desktop or else find another lighttweight desktop to build their distro around. LXQT, it seems to me, simply does not have the same goals that LXDE has had. Derivative projects will have be affected by this project’s change of focus I think.

The HD cover is the only thing this laptop does not currently have. I’ve ordered several covers, but apparently there’s quite a bit of confusion about this part. People seem to think these covers are highly interchangeable. They are not, unfortunately. I have about two or three copies of the wrong cover. There is still another part that is being shipped from China, and it looks correct in the picture. We’ll see if the part matches the picture.

This laptop was missing a screw for the palm rest. I happened to have some extra screws from a replacement screw kit I found on Amazon for Thinkpads. Worked like a charm. Still, there’s something amiss at that location. Something is not fitting properly. There might be something that’s not aligned near the keyboard and palm rest interface there. I’ll have to look more closely at it next time I take the machine apart. Not sure when I’ll do that, but when I do, I’ll figure out the problem.

This is a dandy little laptop. And Peppermint 9 is a terrific Linux distro. I’m not sure why it’s not in the top 10 on Distro Watch. I guess the word has not gotten out what a surprisingly good distro it is. But I’m not worried. I’m pretty sure it will win peoples’ hearts and minds. All they have to do is try it.